Standing where Interstate 93 used to be, Paul Revere Park now offers a playground, seating, and many open green spaces for relaxing or having a picnic. Take the winding walk from North Station across the Charlestown locks to the park. This is the perfect place to bring your dog while enjoying views of the Zakim bridge and Charles River. Construction on the park was part of a planned effort to add green space with the Big Dig, a major construction project in the early 2000s that re-routed Interstate 93 to run under the city.

Come take a dive into nature and explore all the twisty paths at Martin’s Park, conveniently located right next to the Boston Children’s Museum. Martin’s Park opened in 2019, in commemoration of the youngest victim of the Boston Marathon Bombing, Martin W. Richard. This inclusive park allows people of all abilities to come be explorers in their own way. Climb to the top of the jungle gym, be the captain on the play ship, walk along the sunflower garden, or relax in the shade. There’s something for everyone. 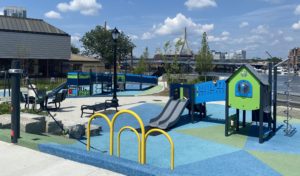 Joseph and Clementine Langone Park sits along Boston Harbor not far from the Old North Church. The park has great views of Charleston and the National Historical Park across the water. Puopolo Playground next door offers  fun play equipment for children from the new swing sets to the multiple slides and structures to explore. The adjoining parks also haves a basketball court, baseball and softball field, and even a bocce court. The newly renovated park and playground are also part of the city’s Climate Ready Boston initiative, which helps Boston plan for the impacts of climate change–ranging from flooding to  increased heat–and build a resilient future. Renovations to the park included raising the Harborwalk as well as the baseball field and bocce courts, adding a sea wall along the Harborwalk, and implementing a better drainage system in preparation for floods.

Looking for a park with a lot of interesting history? Check out the Charlestown Naval Shipyard Park. It is located right next to the National Park Service at the Charlestown Navy Yard site where the USS Constitution is docked. Between its opening in 1800 and its close in 1947, the Charlestown Navy Shipyard was used by the Navy as a hub for the construction, repair, and disembarking of military vessels in Boston. The Navy Yard was in operation during the War of 1812, the Civil War, both World Wars, and the Cold War. Appreciate the history of Charlestown as you read in the park, play on the playground, or visit the Anchor, the seasonal beer and wine garden. What’s even better, Shipyard Park is also close to the water taxi terminal and ferry to Long Wharf.

LoPresti Park  offers stunning views of the Boston skyline and the sunset, and it connects to the larger Boston Harborwalk in East Boston. Historically, the old East Boston Ferry stop used to be where the basketball courts are today. Bring a ball and play soccer or basketball on the maintained turf field or courts. Climb around on the playground and even take part in a ping pong game on the ping pong table available.

How to Use the Harborwalk Webtool